Raphael Varane predicted to have a transformative impact at Manchester United

On paper, Manchester United’s £34m capture of Raphael Varane appears to be the transfer coup of the summer.

The vastly decorated French ace has been widely regarded as one the world’s elite defenders for the best part of a decade.

His exploits at the heart of the Real Madrid and France defences had made him seem an unrealistic, even fantastical, transfer target to some.

And yet, due to a combination of the player’s appetite for a fresh challenge, Real’s financial woes and United’s rejuvenation, that fantasy has become a reality.

So, aside from a gilded reputation and storied career, what will Raphael Varane bring to Old Trafford?

The Athletic has presented a detailed analysis of the French ace and the results are sure to have United followers salivating in expectation.

Firstly, based on last season’s La Liga stats, Varane scores highly at “carry and dribble” and “link-up play volume”. Therefore, his comfort on the ball should help United’s build up play.

In fact, he often starts the moves that lead to goal scoring chances, so could improve the Red Devils at both ends of the pitch. 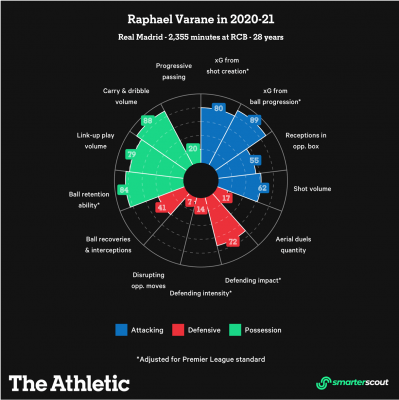 Furthermore, in contrast with his expected partner – Harry Maguire – Varane likes to wait for the right moment to take defensive action. Maguire prefers to play on the front foot.

Maguire attacking the first man, while Varane sweeps up afterwards should make for a complimentary defensive duo.

Additionally, the Frenchman is quick and agile, which should benefit Maguire, who is generally regarded as being slightly uncomfortable on the turn. 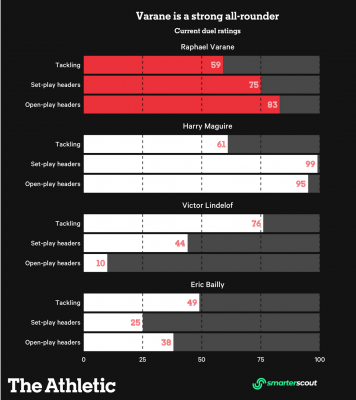 Crucially, Varane’s pace might make it easier for Ole Gunnar Solskjaer to play a higher line. No longer forced to sit deep and counter, this injection of defensive speed could have a transformative effect upon the Norwegian’s tactical flexibility.

It’s not all about contrasting styles though. One thing he does have in common with the current United captain is vocal presence. Although he’s no bawler, he does talk and, usefully for a multi-lingual side, speaks several languages.

This willingness to communicate – combined with his positional excellence – could also benefit his closest full-back, Aaron Wan-Bissaka.

The United right-back has been criticised in some quarters for tucking in too close to his nearest centre-back and leaving spaces at the back post. It’s a recurrent failing that has been exploited by eagle-eyed attackers and remains an achilles heel.

However, with an aerially-dominant World Cup winner to cajole and reassure him, it wouldn’t be completely unrealistic to expect the 23-year-old’s game to improve over the course of the season.

All things considered the positive implications of United’s newest recruit are great news for Solskjaer.

From a tactical, technical and individual perspective, the man teammates call ‘Champions League Varane’ could end up being worth his weight in gold to this emerging United side.