Home » Raphael Varane and Jadon Sancho to start for Man United vs. Southampton

Raphael Varane and Jadon Sancho to start for Man United vs. Southampton

Raphael Varane could make his Manchester United debut tomorrow as the Red Devils travel to the south coast to face Southampton.

Manager Ole Gunnar Solskjaer remained tight-lipped at yesterday’s press conference as to whether Varane and other new signing, Jadon Sancho, would start the Premier League game, but he did admit that both players had trained well.

Varane did not take part in United’s ‘behind closed doors’ friendly with Burnley on Wednesday but the issue is that there is no obvious ‘easy’ game on the horizon to allow him a soft start.

After the trip to St Mary’s, United face another difficult away tie against Wolves before an international break. Sparing Varane both those away games would mean he would not be able to make his debut until September 11th when United host Newcastle, just three or four days before the Reds’ opening Champions League group game.

We therefore think Solskjaer will gamble and throw Varane in at the deep end tomorrow to get him integrated as soon as possible.

Although the manager reportedly wants to switch to a more attacking 4-3-3 formation this season, he is likely to keep his trusted ‘McFred’ double defensive midfield pivot to help protect the new defensive unit. This would see poor Donny van de Beek missing out again in midfield.

Sancho, too, should start after Dan James failed to impress in last week’s otherwise perfect start against Leeds.

Paul Pogba excelled on the left side of attacking midfield last week and Mason Greenwood led the line brilliantly, so they, along with Bruno Fernandes, are likely to make up the rest of the attack.

Edinson Cavani has completed a week of training but due to his extended holiday and lack of team training, he is more likely to start on the bench.

Goalkeeper Dean Henderson is also back in light training after suffering the after-effects of Covid-19 but we expect David de Gea to keep his place between the sticks, at least for now.

Two players who will definitely be unavailable are Marcus Rashford and Alex Telles, who are both injured.

With all that in mind, here is our predicted starting XI for tomorrow’s game at St. Mary’s: 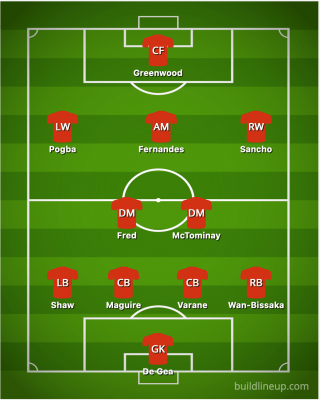