If Bruno Fernandes and Manchester United avoid defeat today against Southampton at St Mary’s stadium they will each equal Premier League records.

The Red Devils went the whole of last season unbeaten away from home and they have now gone 26 Premier League away games without losing. 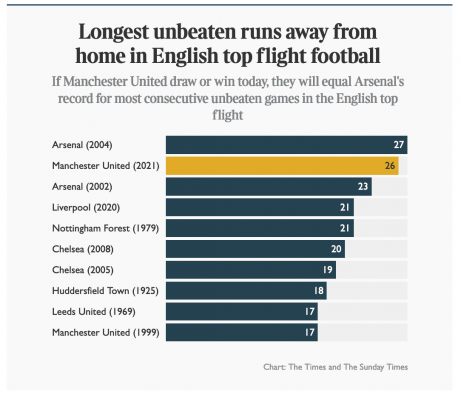 Arsenal were champions in 2003/04 and runners-up in 2004/05, with a team packed with legends such as Dennis Bergkamp, Thierry Henry, Patrick Vieira, Robin van Persie and Cesc Fabregas.

United’s achievement would therefore be all the more impressive given the interruptions caused by Covid-19 and the fact that the team has been, in many ways, a transitional one.

Another point or better will also mean that Bruno Fernandes will equal Gabriel Jesus’s record for away games unbeaten at the start of a Premier League career.

City’s Jesus went 26 games unbeaten away from his debut onwards. 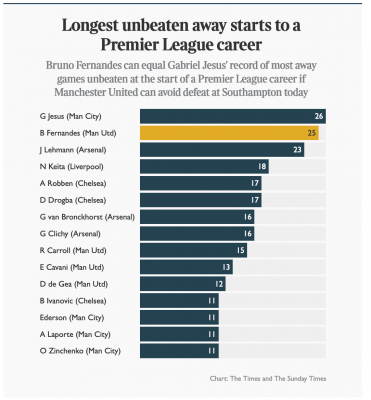 Jesus made his debut for City in January 2017 and came into a side that had only lost two games all season.

When Fernandes made his debut for United in February 2020, the side had lost eight Premier League games up until that point that season.

The turnaround brought about by the Portuguese star’s arrival was meteoric.

If the Reds and Fernandes do succeed in equalling those records today, their chance to overtake them will come against Wolves in a week’s time, ironically, the club against whom Bruno made his debut back in 2020.

That match resulted in a 0-0 home draw, a scoreline United will hope to improve this time around.

Ralf Rangnick admits there is a ‘profile missing’...