Manchester United target Declan Rice seems like an ideal option for the defensive midfield role at United that has been identified as a weak spot in the current team’s line-up.

As of now, Rice isn’t a player at United but as a reported transfer target for United boss Ole Gunnar Solskjaer, it is important to compare his style and attributes to the other options in the squad to get a small taste of what could arrive at the club in the future.

Current club West Ham currently rate the Englishman at a value of £100m which if paid would break Man United’s most expensive transfer record.

The 22-year-old has three years left on his current deal with reports claiming that the star is unhappy with his valuation in today’s market.

This is after both United and Premier League rivals Chelsea have been looking at the player over countless months but have been put off by the asking price that West Ham set.

In an article in The Sun, Rice’s stats were compared to the current stars at United in Fred, Scott McTominay, Nemanja Matic as well as the attacking midfield options.

The stats are calculated from the start of the 2020-21 season. 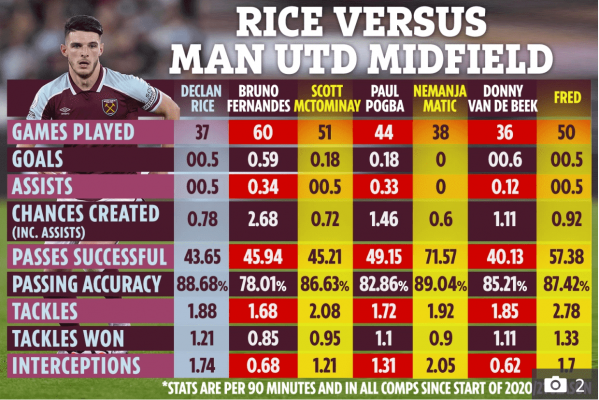 From the stats, it’s clear to see that Bruno Fernandes and Paul Pogba are the clear attacking threats but that is to be expected from a player who is hungry for goals and is playing a lot closer to the striker than the midfield pivot.

Donny van de Beek also comes as a clear attacking threat compared to Declan Rice despite the majority of his games being substitute appearances.

However, this isn’t concerning amongst United fans as it’s always been known that he is wanted at the club as a replacement for Matic in that defensive midfielder role.

The clear stats to compare with Rice’s are Matic’s, as they share similar roles.

The 22-year-old comes in second place when it comes to tackles won which is an important part of a defensive-minded game with 1.21 tackles per 90 minutes compared to 0.95 and 0.9 of McTominay and Matic.

Fred edges that race with a total of 1.33 tackles per 90 minutes.

Rice’s passing accuracy is in second place once again coming out at 88.68% per 90 minutes with Matic only beating the youngster at a successful rate of 89.04%.

While the stats prove that Matic is slightly better in the defensive midfield role, fans have to consider that the stats are not too far away from each other compared to their age.

These figures could be argued to show that United are going for an expensive target who won’t improve on the current setup.

However, Rice is still growing in the league with Matic past his prime, which means there is plenty of time to improve for the Englishman as he looks to secure a big transfer soon.