It may be 12 years since Cristiano Ronaldo last donned the famous red of Manchester United, but the 36-year-old now returns as one of the greatest footballers to ever grace the game.

After it appeared bitter rivals Manchester City were leading the race, things developed very quickly before United announced an agreement had been reached with Juventus.

Manager Ole Gunnar Solskjaer had the following to say about his latest addition in his pre-Wolves press conference:

“Such a tremendous human being as well so let’s see what happens with Cristiano, everyone who’s played with him has a soft spot for him.”

Described by United god Sir Alex Ferguson as “The most gifted player I managed”, Ronaldo is loved on the red side of Manchester like few others before him.

So how could United lineup with the of their legendary number seven?

The five-time Ballon d’Or winner is likely to occupy the central striker role having slowly transitioned from a flashy winger to an out and out striker at Real Madrid and Juventus.

While the move could spell the end of Anthony Martial’s Man United tenure and will likely see Edinson Cavani’s game time plummet, this move could be superb for the development of United’s young attackers, namely Mason Greenwood.

The young striker has been in blistering form so far this season, netting two goals in two games and learning from the game’s greatest ever goal scorer can only benefit him, while in the short term it may mean more time spent on the wing.

United’s forward options now look extremely dangerous with Paul Pogba and Marcus Rashford options on the left, Jadon Sancho and Mason Greenwood deputising on the right and Bruno Fernandes just behind the striker.

The midfield still remains a problem, with the much criticised McFred partnership (Scott McTominay and Fred) likely to be the go-to duo in the pivot.

Nemanja Matic doesn’t have the legs to be relied on over the course of a full campaign and Donny Van de Beek doesn’t seem to be trusted by Solskjaer despite many fans believing he deserves much more opportunities to play.

A defence of Luke Shaw, Harry Maguire, Raphael Varane, Aaron Wan-Bissaka with one of David De Gea or Dean Henderson picks itself and could be one of the better defensive units in Europe.

With a supporting cast including Jesse Lingard, Dan James, Juan Mata, Alex Telles and Victor Lindelof, the strength in depth now looks scary and means a trophy this season is a must for the Red Devils.

This is how United’s best XI could look with Ronaldo in the side: 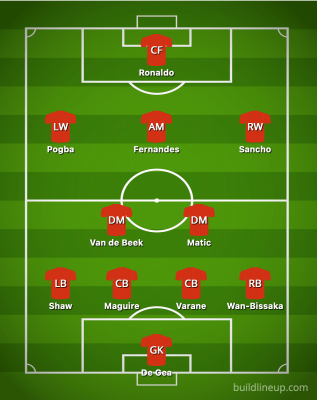