With a dearth of options in midfield and a wealth in attack, Manchester United manager Ole Gunnar Solskjaer could use tomorrow’s match against Wolves at Molyneux to introduce his more attacking 4-3-3 formation.

Last week’s double pivot of Nemanja Matic and Fred did not perform well and with Scott McTominay having had surgery this week that rules him out, the best plan may be to throw caution to the wind and leave just one defensive option – probably Fred – in front of the defence.

For this to work, the defence will need to be able to play higher up the pitch which in turn should mean that Raphael Varane will make his long-awaited debut, as he has the pace and passing ability that are not in Victor Lindelof’s arsenal.

Paul Pogba could retain his place on the left wing with Donny van de Beek coming into midfield between Fred and Bruno Fernandes, but this will depend on the fitness and readiness of Edinson Cavani.

Mason Greenwood’s scintillating form must command a start, so if Cavani plays up front it could see Greenwood fall back to the right wing and Jadon Sancho make his first start on the left side, with Pogba operating between Fred and Bruno.

If Solskjaer persists with a more defensive formation, Varane might have to wait again for his debut, Paul Pogba might be moved into a quarter-back role alongside Fred or Matic and Sancho and Greenwood would occupy the wings.

Anthony Martial will surely drop back to the bench after another poor performance at Southampton and Marcus Rashford, whilst back in training, is not close to being fit enough to take part.

Similarly, David de Gea will continue in goal as Solskjaer has confirmed that Dean Henderson is not yet ready to resume his duties.

Solskjaer was once again talking up Jesse Lingard at the pre-match press conference so he might spring a surprise and find a place for the England man somewhere in the forward positions. Likewise Dan James often pops up in a Solskjaer line-up when you least expect him.

But in all likelihood, we think the starting XI will look much like this: 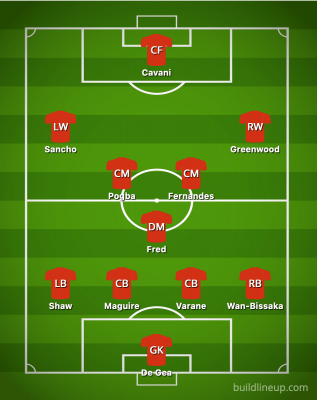