Manchester United star Cristiano Ronaldo has rightfully gained all the plaudits and praise for his recent record-breaking performance for Portugal.

Below, The Peoples Person have gathered all the most crucial stats across the internet to truly break down how it all happened.

According to the Independent, Ronaldo has broken the record for most international goals in men’s football, scoring his 110th and 111th vs Ireland on Wednesday night.

The sensational Portuguese moves ahead of Iranian legend Ali Daei who had 109 goals in 149 caps and had held the record since 2003.

Since scoring his first goal for his country in 2004, Ronaldo has managed at least one goal each calender year, with his most efficient years being in 2019 and 2016 when he netted 14 goals in 10 games and 13 in 13 respectively.

According to ESPN, Ronaldo had this to say on breaking the record: “I’m extremely happy. I needed one goal, and I’ve scored two.

“I’m very happy for the two goals that gave us the victory and for breaking the record.

“This record is mine, and it is unique. I’m extremely happy, and it’s another one for my career.

“It’s about motivation and the desire I have to continue playing football, also from this last contract I made, in which I was happy to return home.”

The Athletic provide the following stats and images on Ronaldo’s incredible international career: 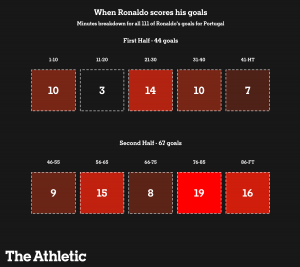 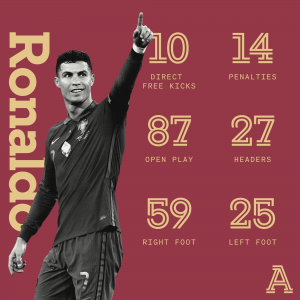 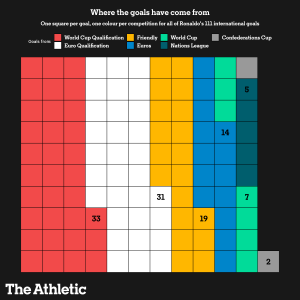 As can be seen by the stats, Ronaldo clearly loves some late drama, scoring the majority of his goals in the second half, particularly towards the end.

The numbers also show the variety of ways he’s scored his goals, helping boost his reputation as an elite and complete finisher.

The statistics also show he’s scored far more in competitive matches than friendlies so he’s certainly not just boosting his numbers at times when it didn’t matter.