Home » Ole Out or Ole In? The big debate at Manchester United

Ole Out or Ole In? The big debate at Manchester United

Ole Gunnar Solskjaer’s credentials for managing Manchester United are constantly under scrutiny and fans are divided as to whether they think he is out of his depth – the so-called #OleOut camp, or whether he should be given more time and backing – the #OleIn camp.

At The Peoples Person we pride ourselves on presenting the news in an unbiased manner, but today some of our writers shared their personal opinions on whether they are ‘#OleOut, #OleIn or somewhere in between.’

Scott Eckersley said: ‘I’m somewhere in between. His squad building has been good and the atmosphere between the team and fans is the best it’s been for a few years but I’m increasingly pessimistic that he’s got that extra few percent that separates the decent managers from the great ones.

‘Tactically I think he’s underwhelming and it feels like he’s at the limit of what he’s capable of. We regularly get outplayed by weaker sides and can’t control a game.

‘If there was a standout manager available who plays attacking football, I’d want them but there doesn’t seem to be an outstanding candidate.

‘Ultimately though, I think he’ll be remembered as a necessary palette cleanser after the misery of Moyes to Mourinho.’

‘After changing my mind many times, I am now 95% #OleOut. I don’t think there is enough tactical awareness and he doesn’t seem to learn from his mistakes. The other day he said at a presser he wants midfielders like Bryan Robson rather than positional specialists, and I think that shows outdated thinking and explains why our midfield is ineffective whoever he picks. Football has moved on.

‘He plays too many players out of position for no good reason, he doesn’t rotate his squad enough and he puts too much faith in graft and loyalty ahead of talent and class. He still hasn’t worked out how to play the low block and has no tactical plan B when Plan A, the counter-attack, doesn’t work.

‘It’s becoming a cliché to say United don’t have a team identity and are just a collection of individuals, but it doesn’t make it untrue.

‘On the plus side, he’s certainly to be given credit for assembling a good squad and building good team spirit, which are crucially important and difficult in the modern game.’

‘I’m still on the fence about Solskjaer. He’s invested smartly and made changes to the club structure that were well overdue and ignored by previous ‘world-class’ managers.

‘Solskjaer’s also as good managing upwards with the board and owners as he is with his own players who clearly love him.

‘The missing piece sadly lies with the fundementals of tactics. As it’s currently understood, he doesn’t take part in training sessions as he’s a manager and not a coach (similar to Sir Alex Ferguson). That’s never a problem but the problem is he’s failed to be ruthless with his staff and solve a glaringly obvious issue.

‘We can’t be second-best on the pitch so consistently and not address it. He needs to resolve this issue however he likes but I feel it’s by bringing in a tactical coach who can give the team the solid shape it needs.

‘Ultimately it’s this area that will be his downfall if it’s not addressed as he’s been brilliant in all other areas of footballing management.’

‘Much like Scott and Marwan, I’m still on the fence a bit. We still need a proper midfield and the managerial candidates out there aren’t great.

‘Maybe give him this season and try to tempt Pochettino afterwards.

‘I’d love him to succeed obviously but we can’t string three passes together a lot of the time.

‘It feels like he has turned us into a team who play exactly like United in the 1999 final. Poor for most of the game and then pull off a miracle at the end.

‘Agreed that the squad and morale building has been good.’

Raj Dholakia was not convinced:

‘I’m Ole out. Firstly it is quite clear that we don’t have a definite style of play. After almost three years in charge, the man has no clue what our strongest eleven is.

‘Secondly, he is tactically inept and it is clearly shown in big matches i.e semi finals and finals of tournaments. There is a lack of bravery to make substitutions (Europa final).

‘His preference of ‘passion and work rate’ over natural quality means we struggle to keep hold of possession.

‘Ole time and time again relies on individual brilliance to bail us out of tricky situations. The issue is that this is not sustainable.

‘Also, we have brought in players like Sancho and VDB when they clearly do not suit his counter-attacking style of football.

‘Why did we even buy Sancho? Was he even a priority over a defensive mid this summer? He is an amazing player but he’s not Rashford who can run in behind for fast counter attacks. Sancho is a cultured player who thrives in a possession based system. Sometimes i feel Ole himself doesnt even know the type of player he is buying.

‘Everyone wanted Jose sacked despite finishing 2nd and winning 2 trophies the year before. We have a good enough squad to be challenging this year, I’m just scared that we’ll waste another season due to the manager not being good enough.

Joe Taylor was arguably the writer most in favour of keeping the Norwegian:

‘I’m Ole in (for the rest of the season)…but if he doesn’t deliver a trophy this season that is quite a long time where the club would have been suffering from this trophy drought and it isn’t right.

‘We’ve seen some tactical masterclass performances from Solskjaer.. for example vs. Villarreal his substitutions worked, Lingard, Matic and Cavani all contributed to the win last night and the timings of the substitutions was key.

‘It’s key that there are some great relationships forming under Solskjaer and the players are 100% happier than they were 3-4 seasons ago. His rebuild has also contributed to the atmosphere on-field and off-field and he has always stuck by his players whenever the media scrutinises them.

‘I think we have to praise the boss for the turnaround behind the scenes as well. The improvements in the academy have been thanks to Solskjaer. He has promoted a lot of players who have turned out to be great and his recruitment team and the football director had a fantastic summer as well.

‘On the other hand it is unfortunately clear that he has key favourites when picking his starting eleven.. for example, the McFred pivot just doesn’t work in every game and it does cost us some crucial points.

‘The coaching team is very inexperienced and I would’ve liked to see a senior figure with experience sitting with Solskjaer rather than someone who has been in the job a few years.

‘However, I will back Solskjaer because I love what he has done to the squad and if he does leave, he has left this squad in the best state that it has been since 2013.’

Zoe Hodges also hasn’t given up on the Baby-faced Assassin:

‘I’m Ole in, but slowly moving to somewhere in the middle!

‘I’m a sentimental person, I like someone in charge who knows and genuinely loves the club. However, this is a make or break season for Ole, we have literally some of the greatest players who ever played the game, if he doesn’t get them to help and win silverware I think he’s out!’

‘I’m somewhere in between. I think it is very obvious Ole is no Pep or Klopp and never will be, but at the same time he has brought a much needed settled period after years of turmoil.

‘With most things people try to make everything black and white whereas reality is always grey. He is heavily criticized for subs but he has used them brilliantly lately with Lingard and notably Matic offering great control and penetration in the middle at the end of matches.

‘Unless we have a really strong long term replacement then I don’t see the point of sacking him. He has done pretty well building the squad and there is a good atmosphere. The only issue is how he has completely neglected the midfield which is consistently our downfall.

‘And I’m not for blaming everything on the coaches because there isn’t a coach out there who would have our midfield looking good, it is a dismal selection of players. I also don’t want him sacked as I don’t want us to lose coaches like McKenna and Ramsey who I’ve heard nothing but good things about.

‘I’ve spoken with people at Vancouver Whitecaps about McKenna’s time there and they rave about him still to this day. The best way forward is to meticulously plan for his replacement to be lined up a year in advance, and not to be drawn into a sacking due to results and taking whoever is available.’

Finally, Sam Peoples is also #OleIn and explains his reasons in this United Peoples TV video: 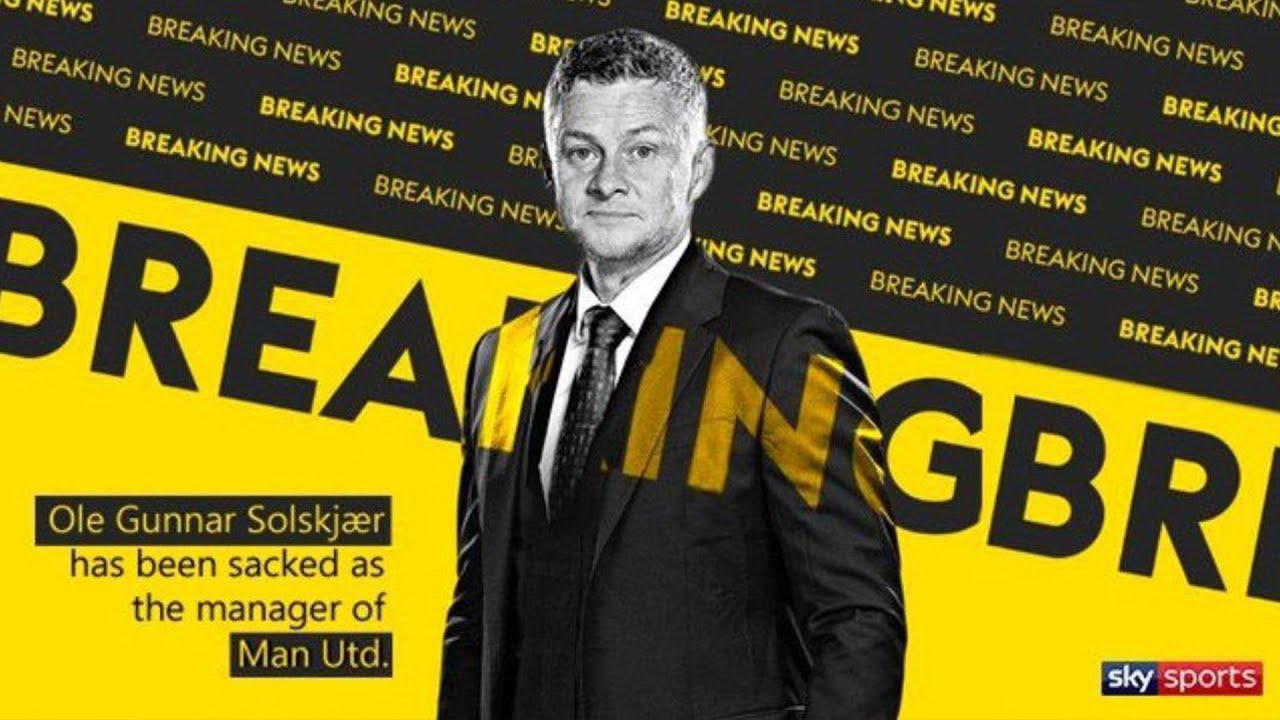