Erik ten Hag has always been a fan of Tyrell Malacia

That much is clear from a Youtube video entitled “The Day Ten Hag Discovered Tyrell Malacia.”

In the video, Ten Hag can be heard emphatically telling his staff, “That kid at left back is amazing!”

He then exclaims, “Take note of him,” before looming over his assistant to ensure his interest was written and recorded.

The occasion was Ajax versus Feyenoord, played out at the Johan Cruyff arena, and the youngster’s highlights show just why United’s new boss has wasted no time in luring him away from the Eredivisie.

In direct opposition against fellow United target Antony, Malacia was an immovable object, causing the Brazilian to bounce off his 5’7” frame as though he were twice the size.

He matched his opposite number for pace time and again, although to Antony’s credit, he did fervently chase Malacia down at every opportunity, intent on reciprocating the pressure.

The left-back showed great composure on a number of occasions, playing safe when necessary and looking for the forward pass when available.

But just as Ajax’s winger proved his defensive appetite, so too did Malacia show his flair.

A foray infield to the edge of the home side’s penalty array led to him flummoxing Edson Alvarez with a deft roulette, before using him low centre of gravity to shield him off an maintain possession. 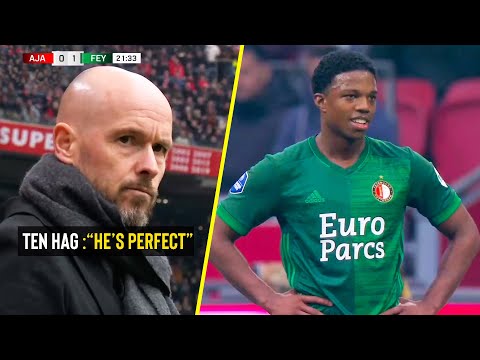 If he can bring all of that to the Premier League, Luke Shaw may find himself under threat sooner than expected.