It’s been a season of subtle but sure progress for Manchester United right back Aaron Wan-Bissaka.

Along with a few of his teammates, he started ponderously and was susceptible to worrying lapses in concentration. It’s taken a while for him to develop an understanding of what’s happening around him and his habit of being drawn into central positions has caused more than a few headaches.

However, he’s steadily improved since the turn of the year and ended the season as one of United’s most (over)used and consistent performers. United’s rumoured interest in Atletico Madrid’s Keiran Tripper could provide a welcome opportunity for him to stay fresh and challenge him to raise his game even further. 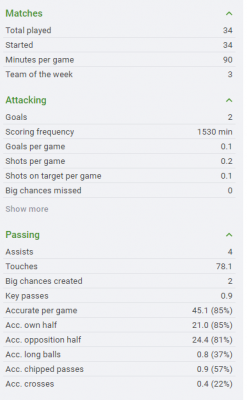 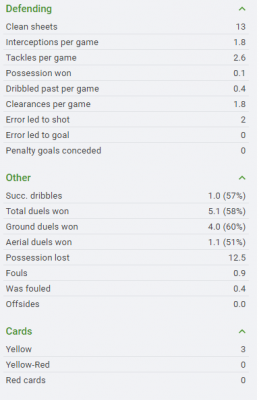 General attacking play. It’s bizarre to think that he started his career as a winger. It’s not that he isn’t capable of being effective – he can and does chip in with assists – it’s more how uncomfortable he seems going forward.

In his own jerky, unpredictable way, he has contributed. However, it’s like watching somebody who’s spent the previous week diligently memorising a few set moves in a vain attempt to out-work an inherent lack of natural rhythm. Yes, there’s a passable impression of a dancer out there tonight, but the rigid shoulders and frightened eyes suggest he’s really not enjoying himself.

With the penetration provided by full-backs of vital importance in the modern game, it’s something he needs to keep working on.

Positioning. Although he excels at dealing with what’s in his eye-line, he seems much less assured concerning what’s happening around him.

Most worrying is his habit of being sucked into the middle of the box, leaving big spaces in the channel for attackers to exploit. It happens so often that it could be excused away as tactical instruction to help cover his centre back but, whatever the reason, it really needs to stop, as it can – and does – cost goals.

Concentration. He has a worrying ability to switch off, which leads to attackers being played onside and attacking
runs being missed.

It’s most notable when dealing with runs on his blindside and has been a feature of his game since he arrived at the club, persisting over the course of the season. His lapses in concentration have been exploited by quick diagonal balls into the box, which should act as a lesson on the ruthlessness of top-level football.

Tackling. Is there any other contemporary player whose all-round game is so clearly defined by one such exceptional feature? While the humble tackle might be one of modern football’s least fashionable skills – flying in the face of the perceived wisdom to ‘stay on your feet’ – ‘Spider-Wan’ has elevated it to the level of performance art.

The way he times those exhilarating lunges is so pure and clean that his one-on-ones inspire a feeling of smug inevitability. In fact, he’s so good at it that he’s only received three (3!) yellow cards all season, despite basing his entire game around gravity-defying lunges in and around the box. It’s incredible really.

Watching him repeatedly shut-down a flummoxed Raheem Sterling (again) at the Etihad was one of the individual highlights of the season.

Improvement. Although we’ve established that attacking clearly isn’t his forte, the above stats show that it’s an area of genuine improvement. His four assists place him just one behind our very own Luke Shaw and ahead of such luminaries as Kyle Walker and Reece James. It’s an area he needs to keep working on if he’s going to realise his potential as one of the best right-backs around.

He’s also shown tentative signs of improved concentration but again, needs to do this on a more consistent basis.

Potential. It’s easy to forget that, at 23, he’s nowhere near the finished article. A quick look across the pitch at Luke Shaw – another player signed for a big fee predicated largely on potential – shows what patience, hard work and effective coaching can achieve.

Most defenders don’t peak until their late-twenties, meaning a comparable rate of progress would make him one of the very best defenders around. He’s getting closer.

What to expect next season

There’s no doubting his potential but patience will be needed while he attempts to iron out the obvious flaws in his game.

Strangely, both his main strength and weakness are difficult to coach – some players are born with them. That said, with the right coaching – and a willingness to learn from Luke Shaw’s emergence as near-perfect example of his craft – there’s no reason why he shouldn’t look to establish himself as one of the Premier League’s best right-backs.

It’s been another small – but important – step on Wan-Bissaka’s road to excellence. There’s clearly a brilliant defender in there, he just needs to work on his appreciation of what’s happening around him. If the coaching staff can help him to realise his full potential, United could have an absolute diamond on their hands for the next 10 years.