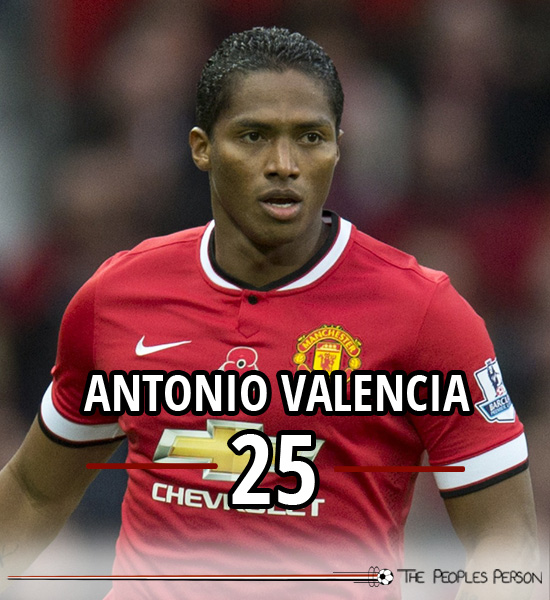 Antonio Valencia started his career with El Nacional of Ecuador before moving to La Liga side Villarreal in 2005. Unfortunately for Valencia, his career with Villarreal stalled as he only made two league appearances for the Spanish club. He was loaned to the Spanish side Recreativo de Huelva for the 2005-06 season and then Wigan Athletic from 2006 to 2008.

Wigan Athletic then signed Valencia on a permanent deal in 2008. His performances for Wigan soon alerted the bigger clubs, and on 30 June 2009, Valencia signed for Manchester United as what appeared to be a direct replacement for the outgoing Cristiano Ronaldo.

His first two seasons for United were excellent as he provided pace and power from the right wing position and contributed a number of assists with Wayne Rooney the main beneficiary.

In 2011 he made history by becoming the first Ecuadorian player to win the English Premier League in May of that year.

The following season was his best for United as he won the fans and players player of the year award but was unable to prevent Manchester City from becoming Premier League Champions in a final day heartbreak for United fans.

After being given the iconic no.7 shirt, Valencia struggled for form before reverting back to his no.25 shirt the following season and blaming his inconsistent form on the pressures of wearing the famous no.7 shirt.

Valencia is an established international for Ecuador and was named captain for all three games in the 2014 World Cup.